Puerto Ayora:
The Largest City in the Galápagos

Puerto Ayora: The Largest City in the Galápagos

The Private Villa Outside of Town

Our plan for the day was to book a snorkeling tour and see Charles Darwin’s Research Center. Before breakfast we took the opportunity to have a hike around the trail that went through the property. We admired the vegetation with included scattered trees with small oranges. One of the reasons that we picked this AirBnB was because Giant Tortoise sightings there were common. Towards the end of the hike we became a little disheartened, thinking that it wasn’t the right time to see one.

Before heading back up to the house, we decided to take a side path that lead off into thick trees. I stood in the clearing admiring some rocks when I heard a long and labored sigh. This was a bit alarming because the exhaled seemed to belong to quite a large animal. We turned around to see a Giant Tortoise hidden in a knee-high patch of flowers. We took some time to admire and photograph without disturbing the majestic creature too much. Then, we had a quick breakfast before riding into town with Kleeber. 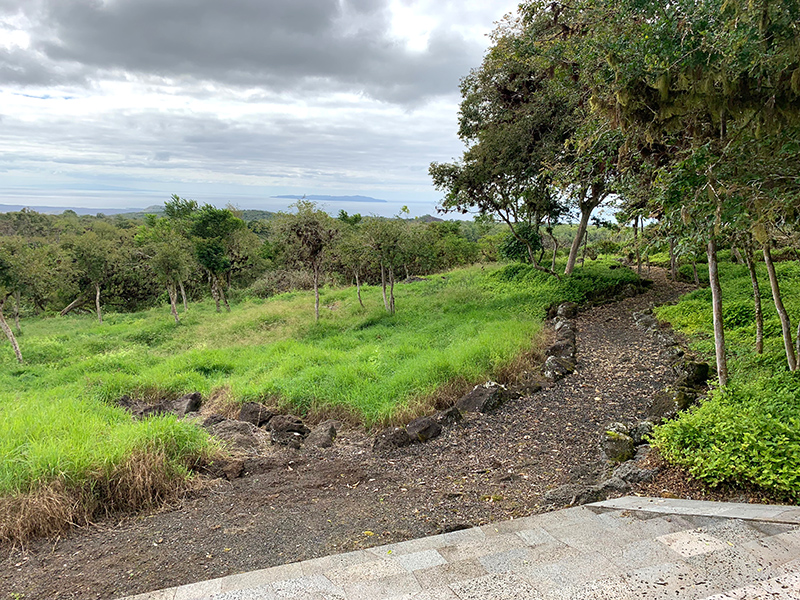 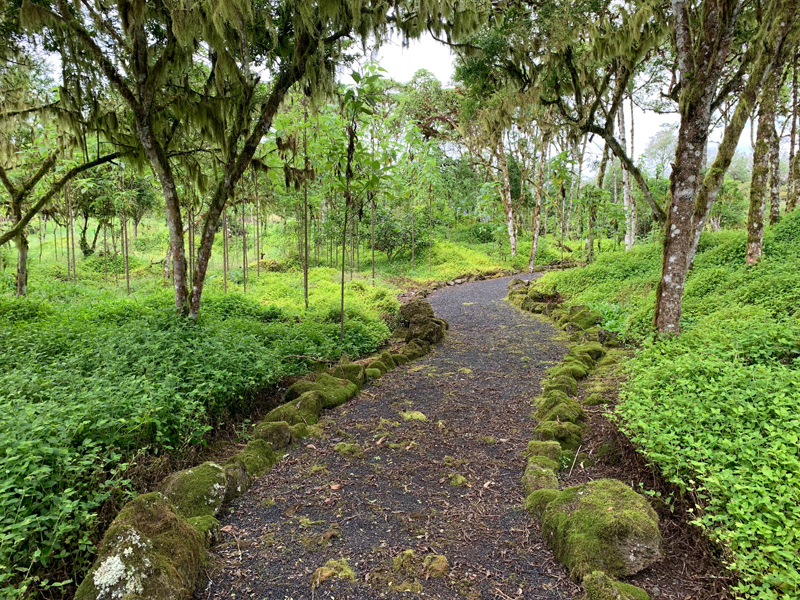 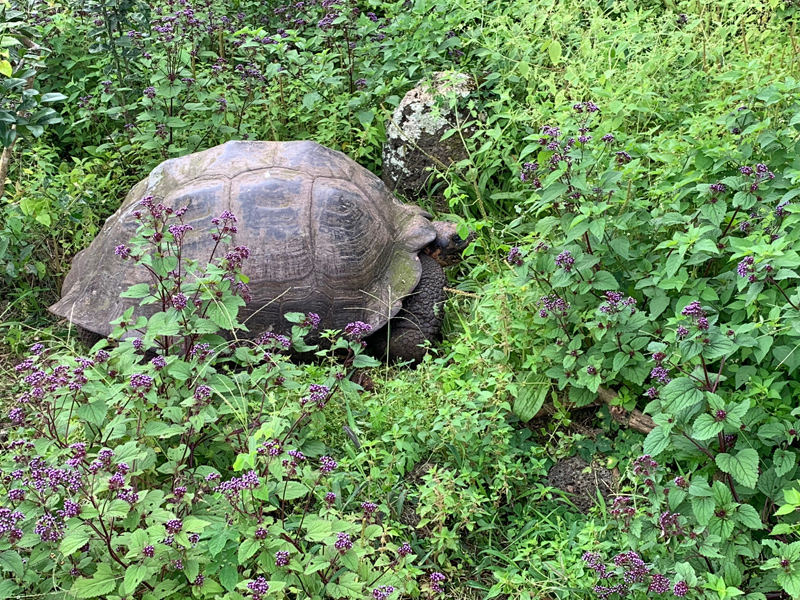 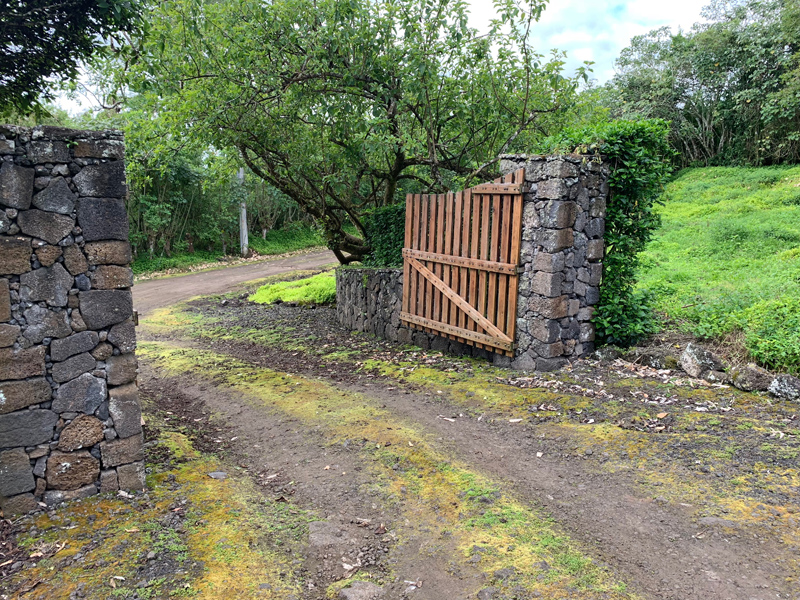 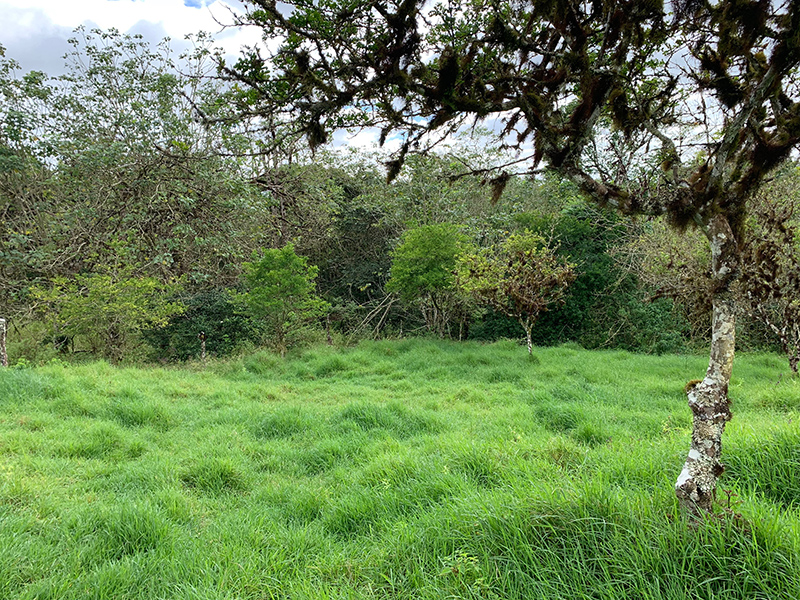 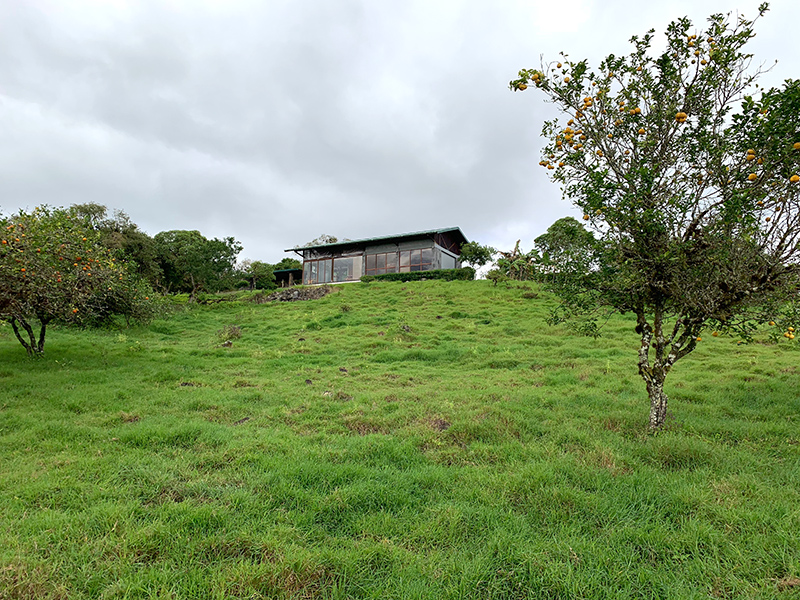 There still wasn’t much luck in communicating, but we tried our best via Google Translate. Shortly after leaving the driveway, Kleeber pulled over to the side of the road. He stopped underneath a tree that had some low hanging branches with some type of fruit hanging. Kleeber got out of the truck, greeted a farmer walking by, and jumped into the bed of the truck to reach the fruit.

He pulled several of these fruits off of the branch before getting back into the truck. “Guava” he said to us while splitting the fruit open to reveal the white inside. The interior reminded me of the cocoa plant – large beans/seeds with soft, sweet, flesh. I picked my way through two of the guava fruits as we continued on the bumpy road towards Puerto Ayora. 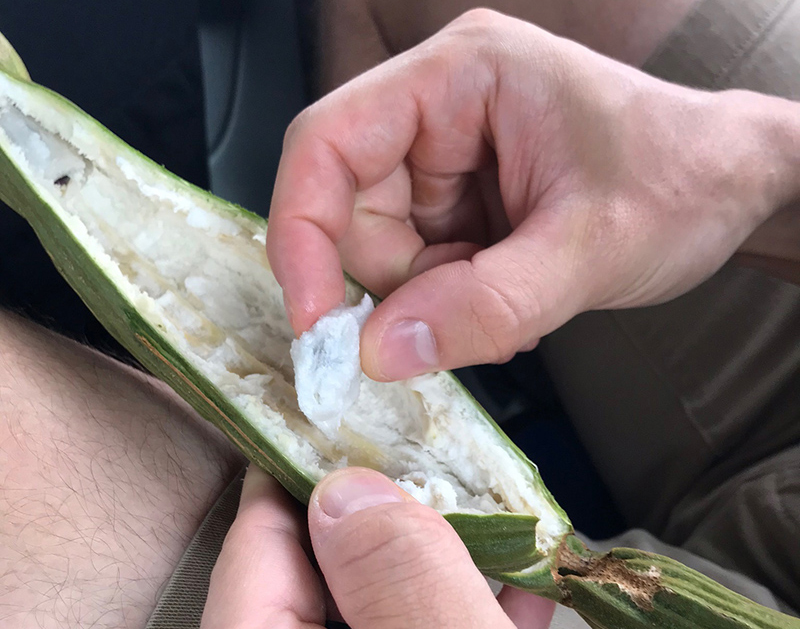 We were dropped off close to the port where Kleeber left us to find a travel agency to book our excursion with. It didn’t take long to find a place as there seemed to be identical offerings on every block. We found place that promised a 4 bout hour tour around the area that would stop for snorkeling, animal viewing, and swimming in Las Grietas. Having several hours before our tour, we decided to walk to the Darwin Research station and explore the area. The Charles Darwin Research Station was a bit different than we were expecting but well worth a visit.

I’m not sure why, but I pictured more of a museum with a history of Darwin. I regret not having more time to explore the different displays that they did have. While there were some indoor exhibits, the facility is actually not solely a tourist attraction. It’s actually a serious, active scientific research station with many employees. They are dedicated to preserving the unique Galapagos ecosystem 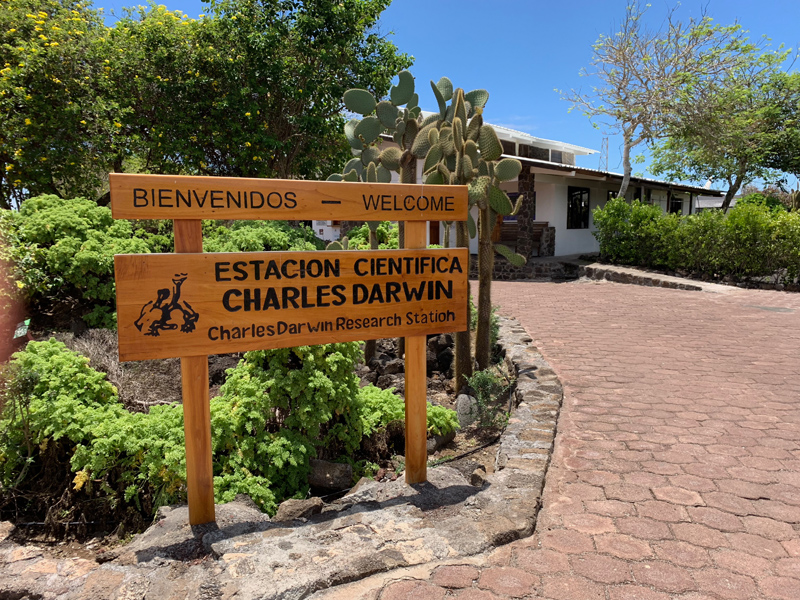 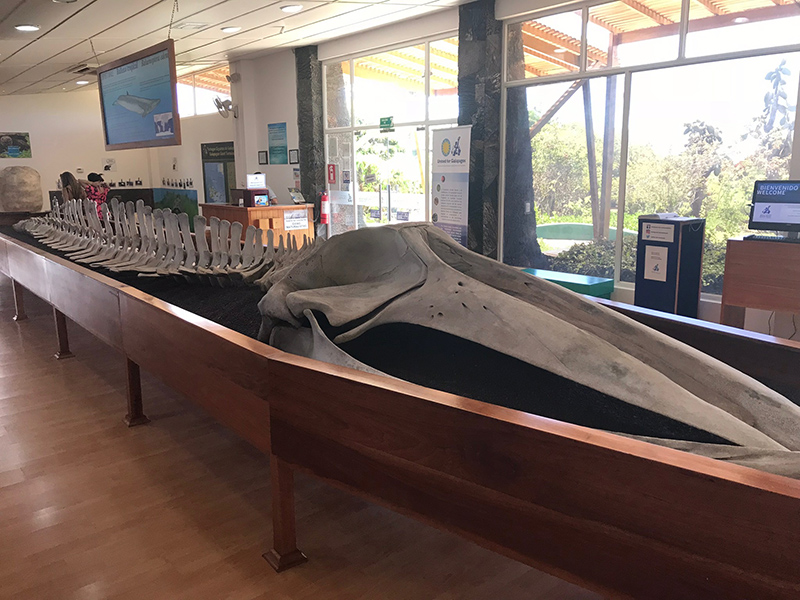 After the Research Station we spent an hour exploring town and eating lunch before meeting with our tour. We packed onto a small boat that took us along with 14 others out into the ocean. The boat was staffed with a driver and a guide. The guide knew a bit of English, enough to provide some sidebar explanations of points of interest. We were the only gingos on the boat. After the guide gave his main explanation of the topic on Spanish he (along with everyone else on the boat) would turn their attention towards us to give the abridged English version as we nodded to show the message received.

We trolled around the rocky outskirts of Academy Bay, spotting pelicans, iguana, sea lions, and Blue-Footed Boobies. After finding a suitable spot for snorkeling, the driver cut the engine and demonstrated the basics of snorkeling. We jumped into the ocean, with gear on, to be treated to views of tropical fish and underwater plants. Shortly before heading back to the boat a small reef shark (about 2 or 3 feet) came very close to my face. I quickly spit out my mouthpiece in a panic, but the shark wasn’t aggressive. He flipped directions, seemingly as startled as I was.

Our final stop of the tour was to dock the boat and go for a short hike to Las Grietas. The Galapagos featured several very distinct biomes ranging from lush vegetation to volcanic and desert like. On our hike in we walked past an active, natural salt mine. The water was tinged with an almost fuchsia color. Las Grietas was a large crevasse where the island rock had a deep separation. We climbed down a slippery wooden stairway that led to a landing where you could jump in. This area was pretty crowded and it was a fight to get through the small entrance area. The water was cold and very clear. Swimming in the crevasse was a bit unsettling. When you looked up through the gap in the rock walls to the sky it felt as though it could swallow you up without warning. We climbed back up the slimy stairway and made it back to the boat the return to port. 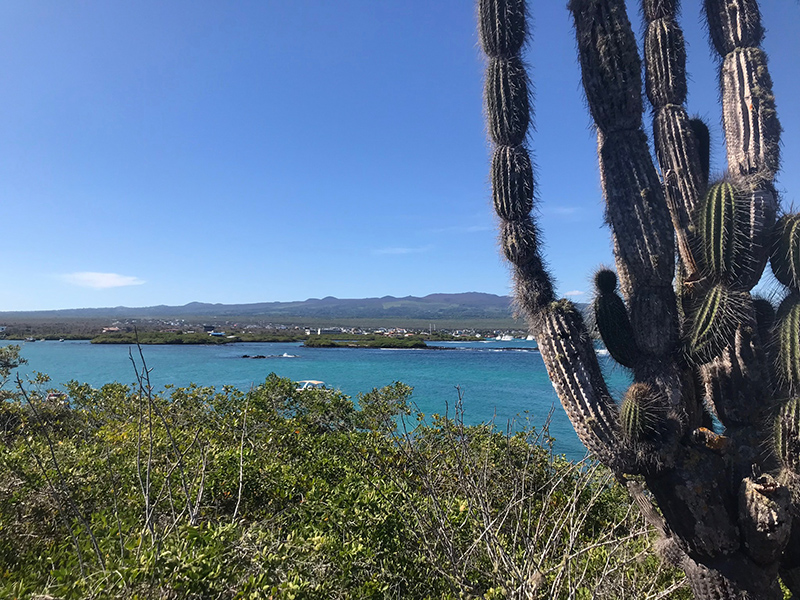 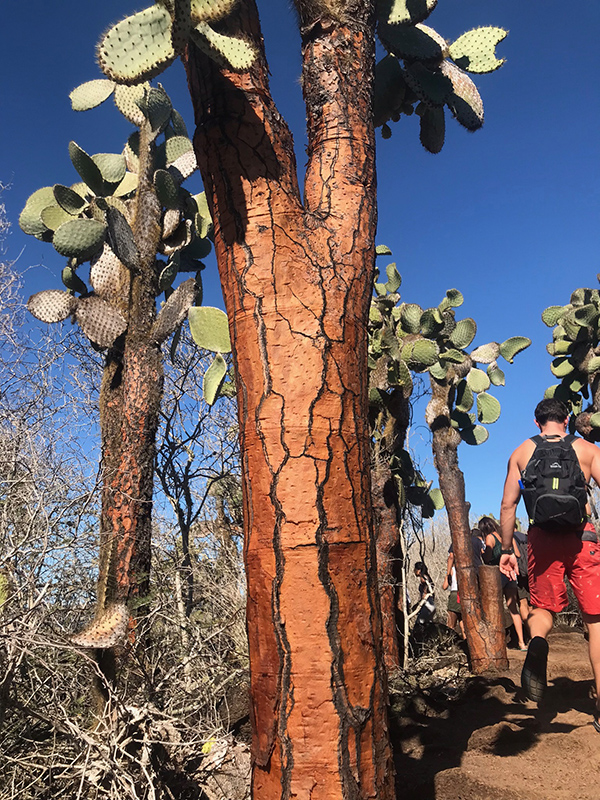 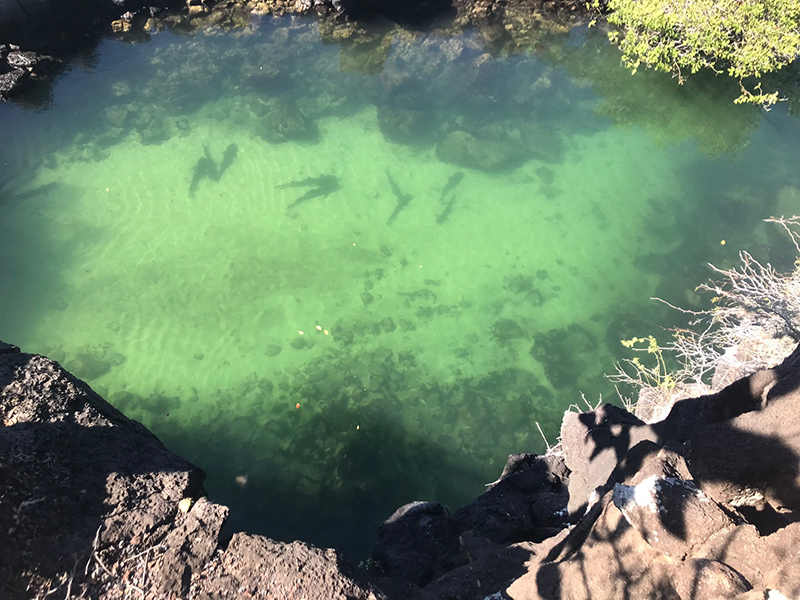 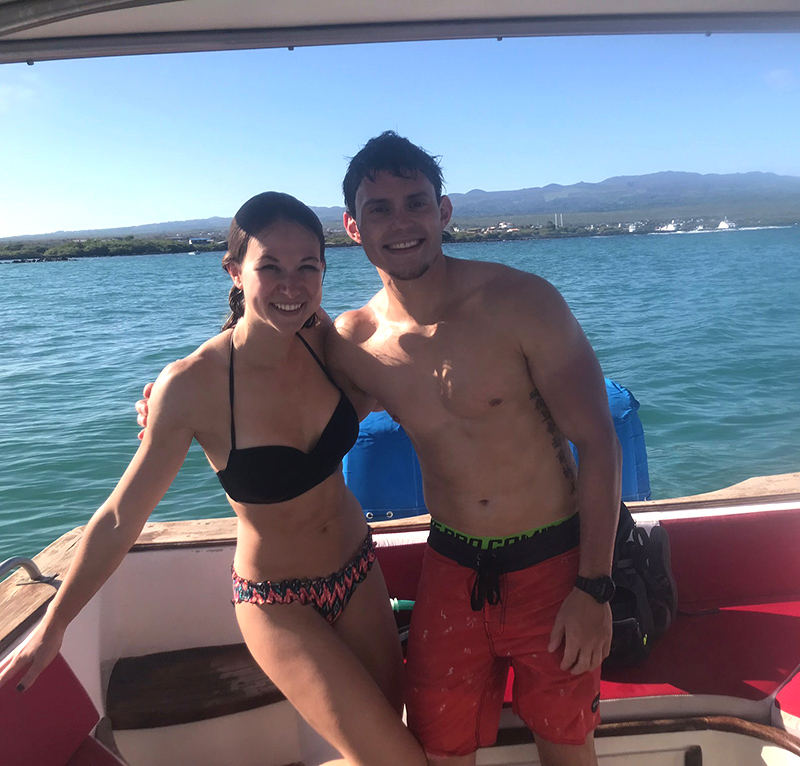 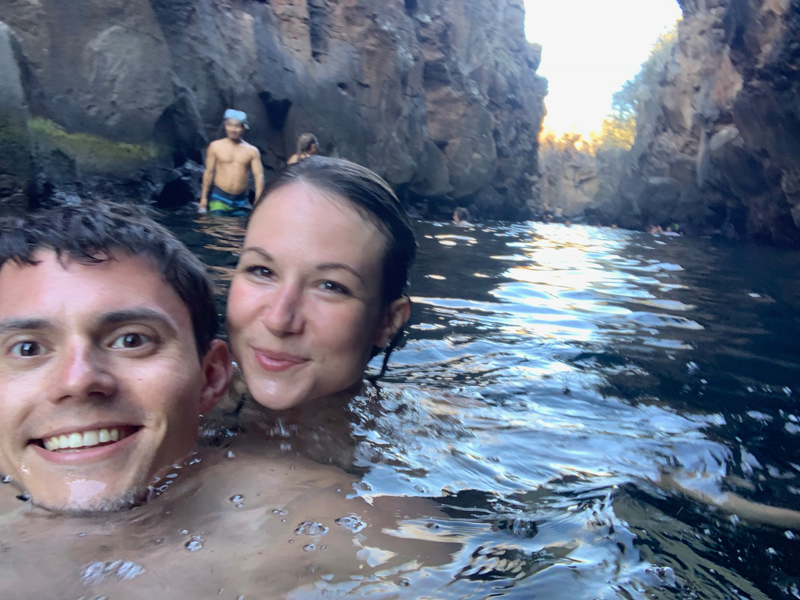 Both our legs and tastebuds were nearing their end of adventurousness. We were starting to have some serious cravings for food that was a bit more familiar. Particularly pizza and beer. Earlier we had spotted a small spot called the Santa Cruz Brewery. We stopped here for a couple of refreshing brews while looking down onto the street. The next location was a nearby pizza place. We scanned the menu for something that looked ‘normal’. The absence of the term ‘pepperoni’ was disconcerting. However, the owner directed us towards a pizza with ‘hot salami’ that would have to suffice. We had spent most of our trip drinking the widely available ‘Pilsener’ branded light beer. The craft brews that we quickly put away in our empty stomachs had us laughing a bit more than usual. After finishing our pizza we sat and reflected on our trip so far.

Towards the back of the restaurant sat an older white couple. The owner approached the table and asked the man sitting there if he would like another Sprite, while gesturing towards

his empty bottle. The man misunderstood this to mean that they were out of Sprite. He became very flustered, confused, and agitated while figuring out his next move. Anna could barely contain her laugher in response. We knew it was time to get out of there. We met Kleeber back at the port and he took us home. The plan was to leave at 9am where he would drive us to the channel to catch the ferry. In typical fashion we returned only to fall asleep about 9:15.

One Last Hike Before the Long Journey Home

We work up early the next morning in anticipation of the beginning of the long journey home. We made it a point to rise early enough to have breakfast, pack our things, and enjoy another short hike around this amazing property. Before the hike we observed a beautiful sunrise with a couple of espressos and appreciated the wonderful and unique aesthetic this home and property offered. We were even lucky enough to spot another giant tortoise, although the one from yesterday was long gone.

The trip back to our home in Michigan consisted of a 45 minute taxi ride, 5 minute boat ride, 10 minute bus ride, 4 flights, and 5 hours of driving. This list of logistical requirements loomed over us. This was the trip of a lifetime but we were ready to be home. 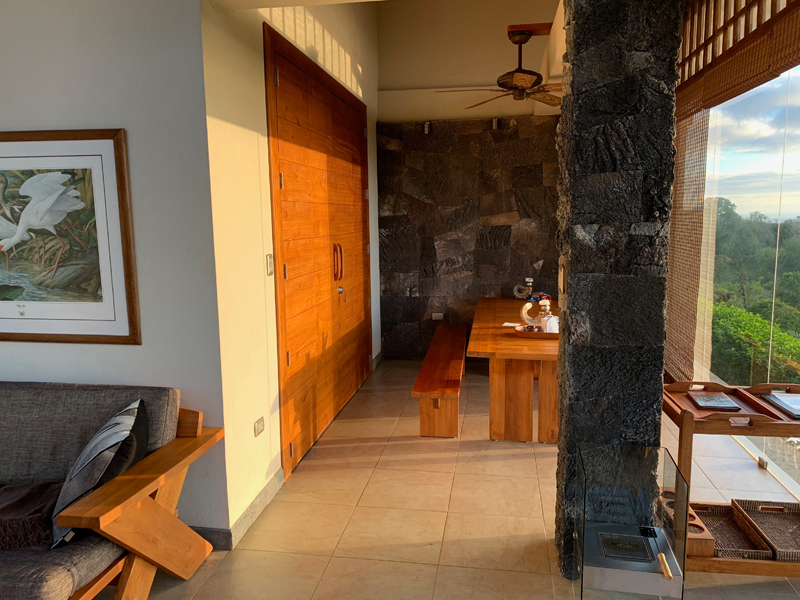 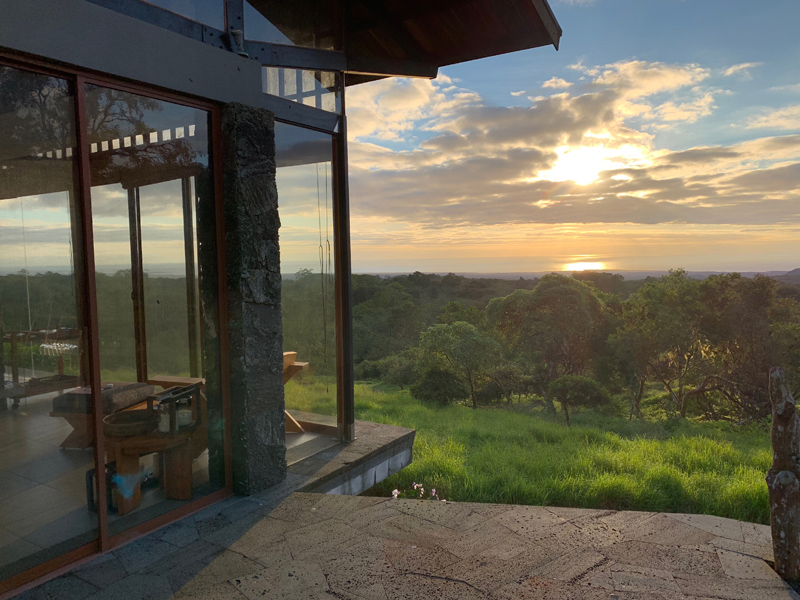 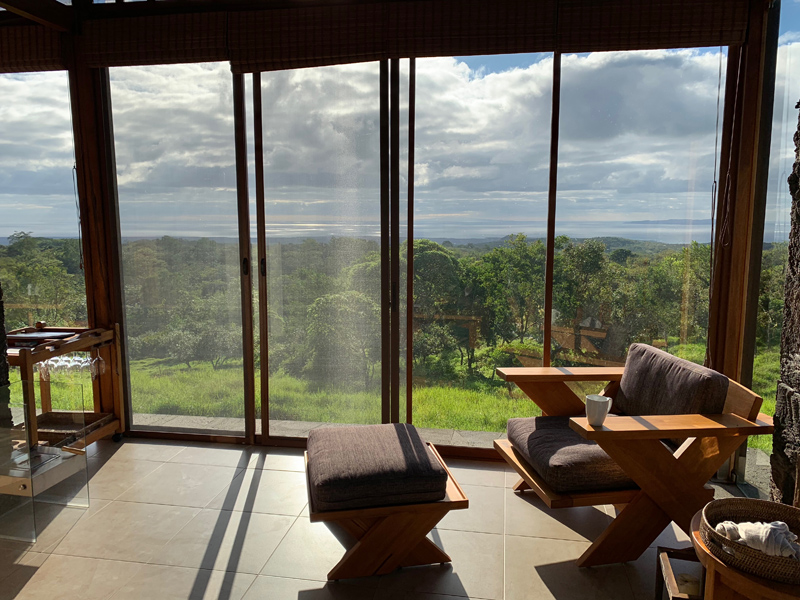 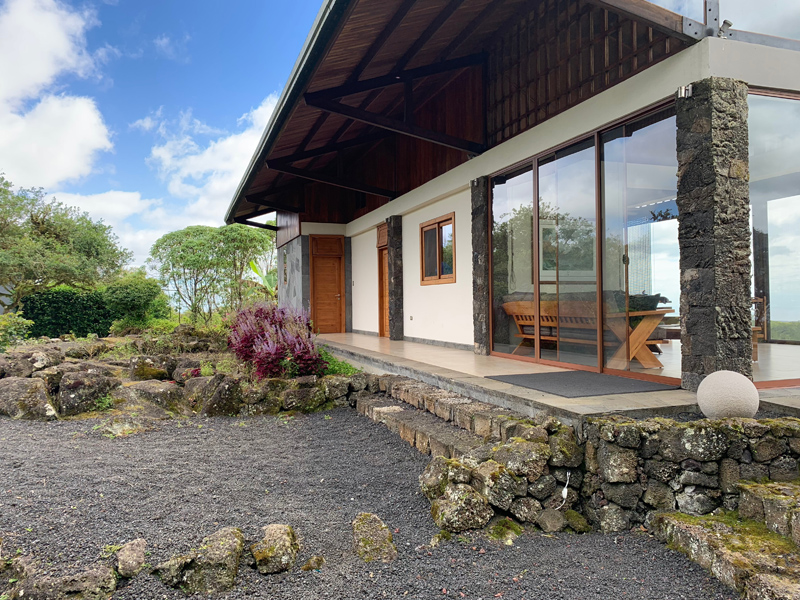 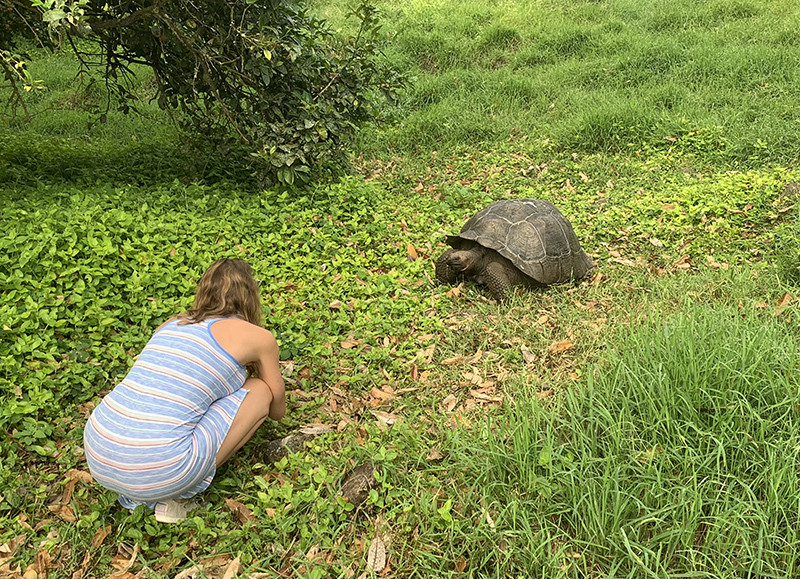 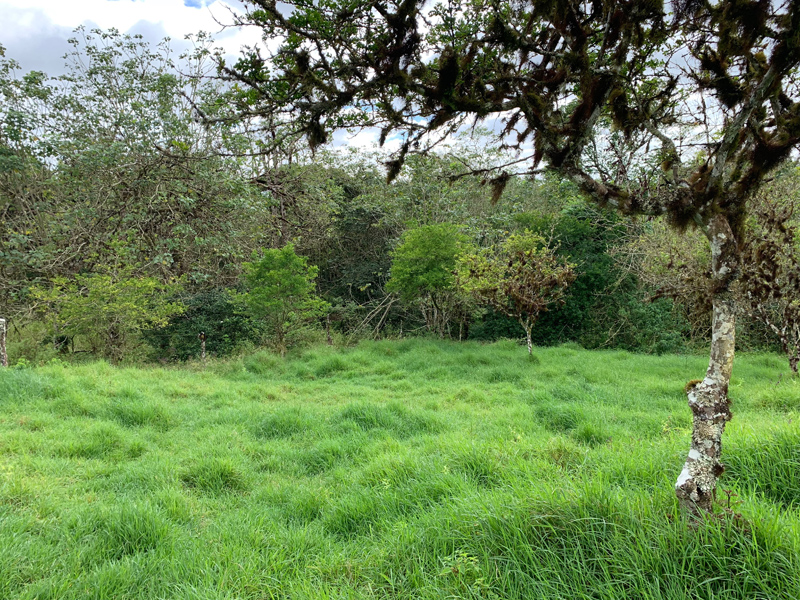